During cell decision-making, gene and protein networks dynamically change in response to cues in order to trigger different cellular states. How information is decoded and transmitted in order to commit to specific cell fates has been a fundamental question in cell and developmental biology. One way to understand this is to quantitatively monitor input-output relationships in single cells during decision-making. In this context,The quantitative cell biology lab aims to monitor how signalling molecules are organized into circuits, how these circuits are spatio-temporally regulated and how they remodel during two important cellular decisions: cell division and cellular differentiation.

Figure 1: Examples of mammalian cells expressing biosensors we routinely use in the lab to monitor cell cycle dynamics in single cells

The decision to divide is a fundamental decision and the conserved networks that trigger cell division adapt and remodel in a variety of biological contexts including developmental transitions and malignancy. We have been exploring spatio-temporal control of cell division in mammalian cells (Santos et al Cell 2012, Araujo et al Mol Cell 2016) and remodelling of cell cycle networks during developmental transitions, using embryonic stem cells as a model system. 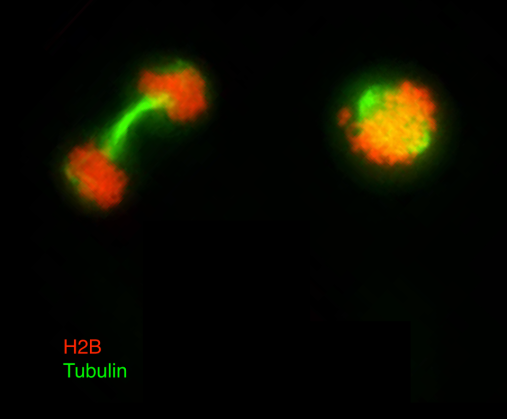 Embryonic stem cells have the propensity to differentiate into the three germ layers. The switch between pluripotency and differentiation in these cells has been our paradigm of choice to understand how protein and gene networks decode cellular signals and thereby encode irreversible commitment to different cell fates.

Both lines of investigation are likely to have profound impact in the understanding of normal human development and the transition from healthy to disease states.

We use quantitative approaches combining experimental methods (based on live cell imaging, molecular biology, biochemistry and chemical biology) with mathematical modelling. This combination of experiments and theory has been key to uncover regulatory principles in cell decision-making.

Friends of the lab

We are lucky to collaborate with the following labs